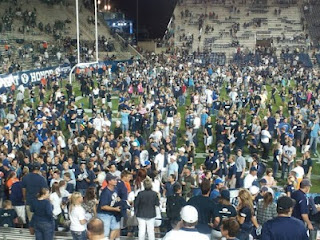 "Everybody's talking at me,
I don't hear a word they're saying,
Only the echoes of my mind."
- Harry Nilsson

As one who always strives to keep it fresh, I thought, 'okay, my news seems to already be old news, so I'll go to Plan B and toss-out a few opinions or theories about BYU's 2012 football schedule (which will be finalized and announced officially tonight at 6:00 p.m. MT)  Once again, someone had already beaten me to the punch. Actually, several dozen someones.

Welcome to Social Media Information Revolution - the Jeopardy answer to the question: What do you get when you cross the Oklahoma Land Rush with a keyboard and the internet?

Here's MY question: If everybody is talking (myself included), who is listening?

Just in my twitter timeline alone - I'm currently road-blocked by twitter's puzzling limit of only being able to follow 2,000 people since I am Joe Nobody - it's not that much of a stretch to say that almost every week a new sports blog or podcast is born, with anywhere from a single lone 'voice' to as many as 10 contributors, editors etc.

I currently fight under the flag of talkingutahsports.com. As of a few minutes ago, we appeared to have eight folks in our starting lineup. Fortunately, for sanity's sake, we have one more topic selection than we have contributors, so there is minimal content overlap. This seems to be the rule on the larger blogs. There are also smaller ones where usually 1-3 people are all covering the same 'beat,' be it BYU, RSL or the Utah Jazz.

On the one hand, I think it is great that we now live in an age where literally everyone who is passionate about something, whether it is sports, scrapbooking, parenting or politics can have a voice and make themselves heard. This has not always been the case.

Back in the Jurassic Era, when I was a schoolboy athlete and sports junkie, each town had only a select handful of people who had a platform to report, comment and opine on the sports news and issues of the day. The rest of us were relegated to cafeteria, locker room or office cooler discussion.

The one really good thing about these days was the nearly total absence of troll types. I can literally NEVER recall anyone making a comment, and someone else walking right up into their face, chest-to-chest and calling them a $%$##&% idiot. I'm sure it happened occasionally, but not in my little corner of the world. Something about real accountability for one's words - and the possibility of having your nose re-located or swallowing a few teeth seemed to keep the dialogue mostly civil. I digress.

So in your mind, contrast the days I am describing - a handful of TV and radio sportscasters and print sportswriters in any given area doing the talking - with the rest of the masses listening, with what we now have.

On any given day, it feels to me like 50 to a hundred of us are ushered into a large conference room. The doors are then closed behind us, and at the count of three, everyone starts talking simultaneously. Then, after 30 seconds or so - or 140 characters if your main frame of reference is now twitter - everyone stops. We were all speaking at once, but did anybody actually hear anything?

Perhaps, with the give and take, back & forth nature of twitter and facebook conversations, and message board and chat room discussions, this would be a better analogy: the 50 or 100 of us line the walls of the conference room. One person begins by turning to the person next to them and sharing a short message. (remember this game?) Then, the process repeats itself until the message has circled the room. When it arrives back at the starting point, does it bear ANY resemblance to the original information?

And it's not like this process is limited to those of us who do this because of passion as opposed to a paycheck.

Check-out sports talk radio or even the extended weekend local TV sportscasts. For every actual sports news maker - athlete, coach, administrator - who is heard from, there are nearly as many interviews and discussions with other reporters, commentators and columnists. The Tom and Jerry Show on KOOK-AM 980 - with columnist Bob Stone from the Daily Diss sitting-in for the vacationing Jerry - are now joined by a 'good friend of the show' - Harold Hyperbole from ZNN/PU.com to break down Madonna's halftime performance at the Superbowl.

Again I wonder, if everyone is talking, who is listening?

There are no right or wrong answers here, just a question from one of those voices in the chorus.
Posted by kugrlover at 4:00 PM No comments: 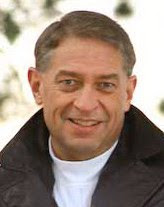